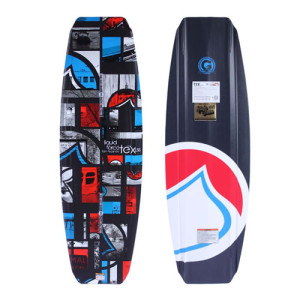 Our “King of the Cable”, Tom Fooshee, is widely known as one of the most versatile riders in the world, and he needs a board that will bring it day after day.  His pro model is designed to shred the world’s finest cable parks, as well as provide ultimate pop off the wake. While many riders prefer a board with Hybrid Tech at the park, Tom prefers the quick response he gets from a standard foam core such as his Tex.  When he wants his board to react, it reacts.  With a slightly thinner nose and tail, though, he’s still able to press any rail in site with the best of ‘em.  In addition, his board gives that solid feel that he desires when boosting off the wake at his home lakes in Austin or anywhere else his world travels take him.   Just like Tom, The Tex has a “Get ‘Er Done” attitude… strap in and let the good times roll!

LF Exclusive GRIND Base
The ultimate in durability from our sintered base material while maintaining the hull shape.

Three Stage, Hybrid Rocker
By smoothing out the break that defines a traditional three stage, the board becomes more predictable without sacrificing the big boosts from the added tip kick.

D-I-S-C Hull through the Center
Double – Inside – Single – Concave.  Softens landings and maintains board speed.

Variable Edge Rail
Rounded rail in the center for a forgiving feel, sharp rail at the tail for edge control and response.

Molded-In, Long Based Slider Fins
Positive hold for hard edging with a flattened profile from tip to tip for superior park durability.